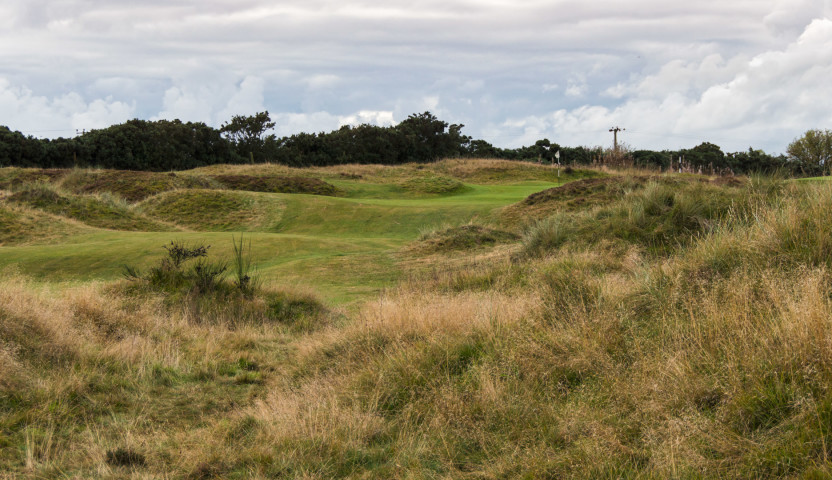 Today we set out from our new base at the Malmaison in Dundee for another classic golf course; Panmure Golf Club, just south of Carnoustie. Luckily today is a Sunday.

Panmure, as so many of the clubs in the area, is laden with history. The club formed in 1845, laid out the first nine holes at Monifieth. After various changes, an 18 hole layout, now the Monifieth Medal Course, was agreed upon and completed in 1880.

However, more and more clubs played at Monifieth, and Panmure decided to move to the present location at Barry, only 800 meters from the ninth green at Carnoustie, in 1880.Over the years many changes have taken place, most notably after suggestions by James Braind in 1922, and later by Ben Hogan.

We, however, knew little about the history of the course when we arrived, other than having heard from a friend that it was going to be one of the best on this trip. We set out with great expectations.

The first hole is a very straightforward par four on completely flat ground. A few well placed bunkers, but not very interesting. The second hole, a par five, also very flat. The third, a par five, slightly dogleg right, but rather flat.

By now I started to wonder; why all the hype? The course is rather ordinary. Are we really at the right course? What is so special?

Then it happens. After you walk through some pines, the course opens up and quickly changes character, reaching the land so eloquently described by the then Secretary in 1924 as “of the most unpromising looking ground from a Greenkeeper’s point of view consisting of large hummocks and deep ravines with marshy looking bottoms, and covered with the coarsest of bent grass, whins and rushes; but to the Golf Architect giving great promise of many sporting holes and shots”.

From here on, all the holes have their own distinct identities, every hole with new surprises and difficulties. They are all great holes, but a few stand out.

The sixth is called Hogan’s hole. It is a fairly short par four, but it is narrow and the approach to the elevated green is tricky. To make it even more so, Hogan, while practicing here for the 1953 Open Championship, suggested adding a bunker to the right in front of the green, where it can’t be seen from the fairway. I fell for it (but got out and made a par, one of the highlights of my day). A great hole, maybe the best on the course.

The ninth is an ingenious par 3. It shouldn’t really be that hard, it is only 168 yards from the men’s tees, but it is littered with small hills, creating an optical illusion (or confusion, if you will). To top it of, a pot bunker cleverly guards the green. Yes, I tried it, too.

The 12th hole crosses the Buddon Burn. Unless you are a very long hitter, the burn does not come into play on your tee shot, but it surely complicates your approach to the elevated green. A beautiful hole, both visually and strategically.

From the high 13th tee you get a great view of the next door neighbor, Monifieth Links. You cross the Buddon Burn again, and start on your way back along the railway line.

At the very end, on the last couple of holes, you are back on land similar to the first few holes. But by now you are grateful for some relief. Holes 4 to 15 have been quite an experience, some of the best holes on this trip. They wear you down, but at the same time they make you want to come back for more. Now that you know how to play them, you will surely beat them the next time around. Ah, we are so easily fooled.

One minor gripe: the course was not very busy on an October Sunday, but we did catch up to a fourball with caddies. In spite of us reaching the tees before they had finished hitting our tee shots on several holes, they didn’t let us play through. Finally, at the 17th, I discreetly approached one of the caddies and asked why that was. “We’re just trying to keep moving on” was the response. Disappointing behavior in my opinion, caddies should be responsible enough to let faster groups play through, even if their players are unaware that they play slowly.

So why is it lucky that we are here on a Sunday? Because Sundays are casual. On other days you need a jacket and tie to eat in the main clubhouse, and we didn’t bring any formal attire, an oversight on our part. You need to be prepared for formal requirement at these classic clubs.

The clubhouse was built in 1906, modeled after the Royal Calcutta clubhouse. It has a very British upper class feel to it, complete with dark wood, lots of trophy displays, and leather sofas. Ladies have their own facilities a bit to the side, as is often the case at older clubs.

All in all, Panmure was the second best course on this trip, only Carnoustie was better. We definitely recommend that you include Panmure on your trip.

Your email address is safe with us.